The roommate offered to watch a friend's Boston terrier a while back and this week he decided to cash in. The pup's name is Dido.

I'm not certain of her age, but she is a hoot to have around.  Though it does add a different element to walking the dogs in the morning, now there are three.  The two dogs and I have our morning routine down pretty good so adding an additional pup has been interesting. 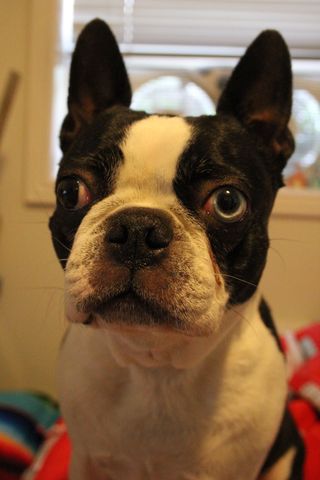 I can say that there have only been small scuffles and no fights. For this I count my lucky stars, three female dogs in the same house can be difficult. Other than a few jealousy moments they are all getting along fine.

Dido is quite the personality.  I've always thought of Ellie as spunky and I still stand by this. I would call Dido quirky. With her different colored eyes, pig-like snorting and deep snoring it's hard for me to call her anything but quirky. She's a doll to have around, obedient and not rowdy. Though she loves to go on walks and will pull your arm off until she finds a spot to releive herself.

turn up your volume, don't watch, just listen to her snoring.

She insists on sitting in my lap which I'm fine with but is always a struggle. She is a few pounds heavier than Ellie and she does not sit still.  If you stop petting for a moment she quickly turns to lick your face and remind you what you are supposed to be doing. She cracks me up with her snorting and licks. 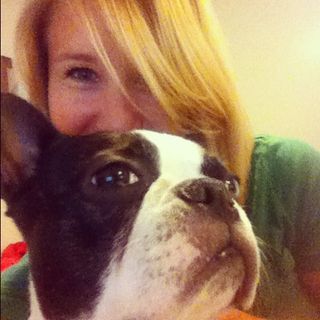 She'll head home sometime Sunday. It's been nice having her around, and I'm sure I'll miss her when she's gone. I've enjoyed her enough that if there is ever a time in the future when I get a new dog, I'll consider getting a Boston.