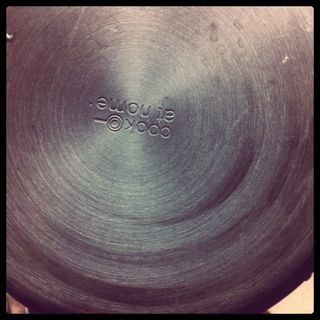 See those rings? They're scorch marks. Similar to what you would find on a steak or piece of grilled chicken. Mostly because they are made by fire. Not because I grilled my saucepan for dinner.

You've all seen the videos that exhibit how fast an oil fire can get out of control, right? Kitchen fires can be super scary because they spread so fast and are usually burning some kind of grease or oil.

Well, I had my first kitchen fire. But it wasn't nearly that dramatic.

You see, I was reheating some soup. I smelled burning, but I knew the pot had boiled over previously so I didn't think much of it. I glanced over in the direction of the kitchen and caught sight of smoke… billowing? gathering? coming from? either way, there was smoke.

And this is the part that continues to be funny to me, I'm sick. I have a head cold. I'm fuzzy and my ears are plugged. So when I noticed smoke and that it was not just a few particles burning off the heat element, I figured I should get up and see what was going on.

There was no urgency.

There was no panic.

It was, oh. I guess I should see what's going on.

So when I got over there and saw the flames licking up the side of the pot, the thought process was super similar.

Oh. Oops. Guess I should move that pot.

Of course, all is fine, there is no issue (other than a smoke filled apartment). And the whole thing remains as a fuzzy memory in my fuzzy brain.

So I'm thinking I should limit my cooking while I have a head cold.