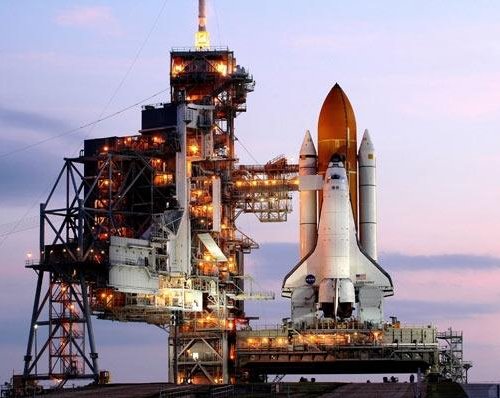 The Endeavour Space Shuttle took off from the Kennedy Space Center in Florida yesterday.

I've never seen the space shuttle leave the ground to travel though the atmosphere and into the last frontier.  But I have seen it return.  I've heard the double sonic boom as it enters the atmosphere.  I've seen it streak across the sky to land on the dry lake bed some 20 miles away.

You see, when the weather is bad at Cape Canaveral, the shuttle lands on a sun-baked dry lake bed in an obscure part of southern California.  Only 15 miles from the sleepy town where I grew up.

(I consider myself lucky to have worked there and eaten it 4 nights out of 7.  Makes a person want to drive 4 hours out of the way just to have some.)

Then, about a week after the shuttle lands, it climbs on top of a giant plane, and gets shuttled (pun intended) back to Florida.

One of the things about living so close to an air base that is the site of experimental aircraft is hearing a sonic boom.  Daily.  Have you ever heard one?  Sounds like the house is gonna come down.  There is a crazy loud boom, the windows rattle, you feel it in your chest.  It'll pretty much change your life.

It's one of those things I'll always remember.

One thought on “space travel rocks my world”