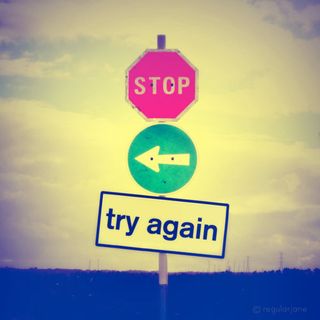 I realized a while ago that I can't live my life while having regrets about the past.  From exes to decisions about work and school.  Everything is connected and if I am unsettled about one aspect, the others suffer too.

Plan A – College was more about going to find someone to marry and have pretty babies with.  If I got an education in the mean time it was a bonus.  I don't think this perspective was something that was taught to us as impressionable young women on purpose.  But I know a whole generation of women my age who have a similar view on how life is supposed to work.

Plan B – Being the provider was always secondary. “Go to college so you can learn a skill so that if something happens to your husband and he's not able to provide for you and your children then you can do it.”  Always secondary.

I have no issues with traditional gender roles.  The system works beautifully for a ton of people.  On the other hand, it's not something that should be planned on.

College was more about getting married and starting a family, the thought of supporting myself and living as a single person was definitely Plan B.  Never something I thought I would actually have to do. Though I remember the specific moment when I realized that if I had to live with Plan B for the rest of my life, it was better than what I was currently living.

For a while I was on track with Plan A. I was clicking along at a good pace and then the rug came out from underneath.  I felt as thought someone had come along and hit the reset button without warning me.  Heaven forbid they ask permission to do such a thing.  It took me a while before realizing that no one hit the reset button, I did.

And now, while things are not as I planned when I was 16, I don't have regrets about the way things have gone for me.  I may be disappointed that certain events didn't turn out differently, but no regrets. And for some reason, disappointment and regret don't quite feel like the same thing.

It's be a while since I felt like Plan A was something I would be able to plan on.  But I've fought to keep it, probably harder than I should have.  And because Plan B was the secondary plan, I never gave it the attention it needed and deserved.

Only in the last few months have I accepted that Plan A is supposed to be Plan B.  Because I can't really plan on someone sweeping in and sweeping me off my feet and having a hundred pretty babies.  First of all, it's not realistic.  Second, no guy really wants that.  Not like that.

I've experienced a mental shift that makes Plan B the new Plan A.  And now I'm off to conquer  the world by myself.  Because I can't settle for someone doing it for me.  And why would I want them to?

One thought on “plan a or plan b?”